No. 216 entered service with Sheffield Transport in early 1947.  It was the first vehicle to non-Utility specification to be delivered after the Second World War.  Most of 216's short revenue-earning life was spent on single-deck services such as Route 31 to Lower Walkley and on East End workmen's services.

Following withdrawal from passenger duties in 1957, No. 216 was converted into a mobile canteen and was located at sites such as Pond Street, Commercial Street, Castlegate and Bridge Street.

When withdrawn in 1967, No. 216 became the first Sheffield bus to be preserved.  The main wooden framework was in poor condition and was completely restored and renewed soon after acquisition.  Since then, no further restoration had been carried out until late 2015 when No. 216 was moved to the Museum workshop so that work could continue.

Restoration work  is now ongoing in the Museum workshop to return No. 216 to its original condition as shown in the photo below.

This project has been supported by a restoration grant from the Association of Industrial Archaeology. 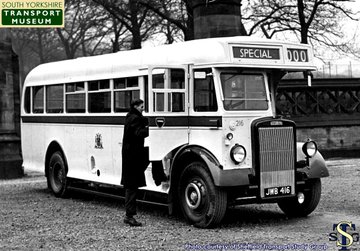 No. 216 when new at Norfolk Park, Sheffield.

This project has been supported by a restoration grant from the Association of Industrial Archaeology.